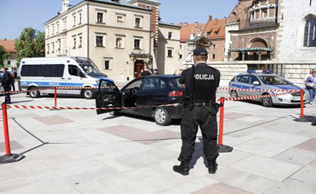 A man who threatened tourists and a priest with an axe at Wawel Castle, claiming that he owned the historic seat of Poland’s monarchs, has been ordered to undergo psychiatric evaluation.

Grzegorz Ś, 48, drove a car borrowed from his Kraków neighbour into the castle courtyard on May 8. He brandished the axe at the priest and tourists, ordering them off his property and yeling ‘Wawel is mine!”

He was arrested after police fired a bullet into the car’s tyre, and appeared in court charged with risking lives, threats, violence and forcing the castle guards to abandon their official duties.

He faces up to three years in jail if convicted, but will not be tried immediately if he is found to be psychologically unstable.

Gazeta Krakowska reports that neighbours of Grzegorz Ś said he had suffered a series of personal crises, as his marriage fell apart, a business collapsed, and an attempted political career failed to take off.